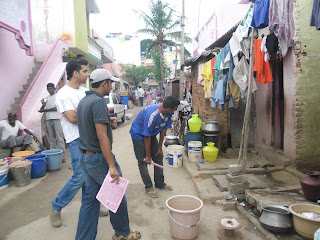 On "World Child Labour day", there could be nothing more fitting to do than to follow-up on our campaigning last week. (You can find the personal accounts by our volunteers here). 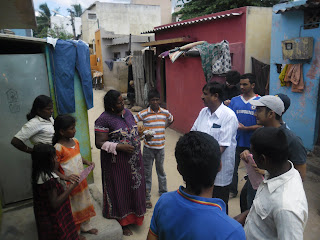 Tucked away near Frazer Town is New Bagalur, one of the largest slums in Bangalore.
In our continuing effort to "Stop Child Labour !" through education, a group of 8 - including volunteers from the SCEAD foundation and the headmaster of the Government Kannada and Tamil school, the enterprising Mr. Krishnappa, planned to campaign in New Bagalur with the agenda of Free Education. 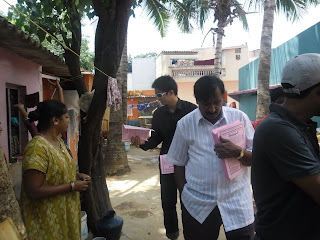 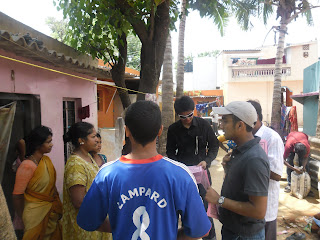 When we did take the message to the slum-dwellers we were regularly met with the response "free aa?", a phrase generated a lot of interest because many households had already enrolled their children in the nearby private schools for a relatively exorbitant fee. The message spread very quickly within the community.
During the first leg of our campaign, we met with a very smart 8th std girl Shweta. She conversed very fluently in English and was kind enough to come along and point us to areas where the children aren't going to school. This way we were able to target our campaign better. 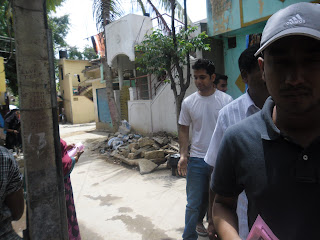 As we went from home to home, we realized that the area was endless. Even though we covered more than 200 houses, there were many more that were left out. We plan to visit the other sections in the coming weeks.
In all, the response was good and many parents seemed very interested in the idea of free education. We expect that this visit would lead to an increased enrollment in the school.

Though the visit sounded encouraging, as headmaster Krishnappa and our very own Siju Daniel put it, the bigger issue is the number of 'drop-outs'. Very often kids are enrolled in the school but quit soon after they have received the free uniforms, shoes and books. The next step for us is to visit the area during a weekday to identify drop-outs and counsel their parents on the benefits of education, especially when it comes free of cost. 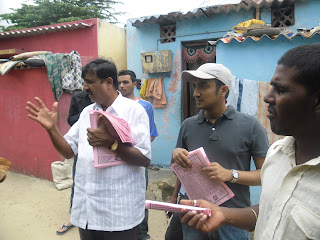 We need to make this movement more sustainable. Our ultimate aim should be to uplift these communities so that they can think for themselves. For this, the growth in the number of educated within the community should be organic. We will work towards these goals in the weeks to come.


It was World Child Labour day,a great day to campaign against one of the biggest problems in our society.
We had to follow up last week's campaign at New bagalur,a slum in the vicinity of Frazer town.A group of 8 volunteers representing SCEAD foundation were accompanied by MR Krishnappa,the honourable headmaster of the Kannada and Tamil Medium Govt school Bangalore.Our Main Goal was to educate and motivate the drop-outs from school to pursue Studies rather than working or just whiling away their time in the streets.We split into two groups so as to cover a large area.Our idea of free education including afternoon meal,books,uniform,bus pass was accepted well by the people and it gave them a worthy new option to life.Some children wer shy,some were scared of being questioned and some were excited!!The rare smile on their face was a joy to watch!.
Our school has been credited with the "First ENGLISH medium Govt School in karnataka" tag!.Parents regretted sending their children to private schools which charged a massive fee.If only they knew earlier!.Nevertheless their children are getting educated unlike the rest.
Our message spread like fire and we managed to reach the entire community.We received a lot of support from some of the educated among them,especially this 8th std girl Shwetha.In that way we could target our campaign better.Role models like Shwetha would set a great example among them and increase the number of educated within the community.Scead foundation has promised to help Shwetha in our higher education.
Pamphlets were distributed to all the households.One man I met,has plans of bringing his 3 children from Tamil nadu who were working with their mother in farms.
All in all our message was clear,To Stop child labour we need to educate the Uneducated and help sustain good morals in them.
Our next step is check their growth regularly and put them in a position where they can be independent,intelligent and able to understand what life could have in store for them if they were educated!
Personally,i had a great time talking to the families in my mother tongue tamil.Im proud to have been fighting for a cause and I thank Scead Foundation for giving me this opportunity.
Cheers!
Naren Elango