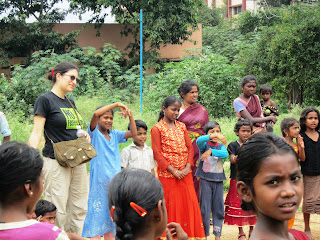 Last Sunday all the interns along with SCEAD members went to the slums for campaigning. The purpose of our campaign was to approach children and their parents and encourage them to enroll to school. Many children from poor families are sent to work instead of being educated. However this creates a vicious circle of poverty because without education they do not get opportunities for a better life as adults, remaining poor and leading to the same pattern. It is this vicious circle that SCEAD wants to break and that is why we went there. We tried to show the children that school can be actually fun, and for that we played educative games along with some children from the slums that are already enrolled in school. For example one intern (Jin) came up with a game that helped the children learn how to count to ten in English, and we all enjoyed playing it very much. Even though the children did not speak English we managed to communicate well and have a lot of fun together. 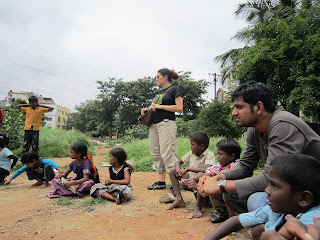 After the games, the members of SCEAD went to talk with the parents of the children that were not enrolled so as to inform them about education and schooling opportunities for their children. Contrary to what I expected, the parents were very welcoming to us and greeted us with big smiles, despite their hard living conditions. I must admit that even though I was preparing myself for this visit, the sight of the conditions in which the families are living there, the poverty and the absence of things we consider basic necessities (such as access to a toilet/washroom) was still a shock to me. I had met some of the children that live there when teaching in the Government School and thanks to the school they were so well groomed that I could never guess what their background was like. 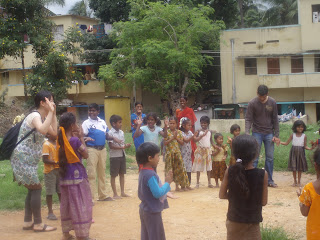 Right next to the slums there were some beautiful houses. I noticed that the children living there, even though they were invited and they wanted to, were not allowed to play with their next door neighbors from the slums (living literally 2m away).
The campaign at the slums was one of the strongest experiences of my life. Only time will show if we have been successful with our mission, but I really hope that we have and that the children from the slums with the sweet smiles on their faces will get an education and opportunities for a better life.