Our experience at the Scead Foundation has been eye-opening.

September 22, 2017
Our experience at the Scead Foundation has been eye-opening. While most of us did have experience with volunteer work, venturing into slums and actually talking to the people who lived there wasn't something that any of us had done. At first, the idea of approaching strangers and talking to them about something as personal as why they choose to not send their children to school was a task that we found quite daunting. But on actually interacting with the people in the slums we realized that they were nothing but eager to share their story with us. There was an ease with which they spoke about their lives that we did not expect to find and we found ourselves listening to the rapt with attention to them. I think it's also safe to say that we did go into the volunteer work with biases about how we may have to convince children about why education is important. But upon interacting with them we found that most of them were, in fact, enthusiastic about going to school and would like to continue studying. 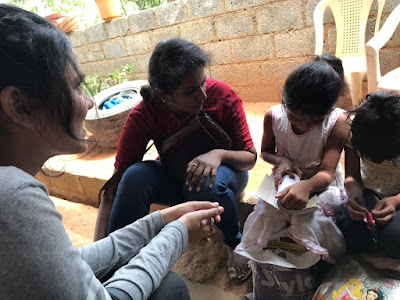 There were difficult days too where we had to talk to elders who were dismissive about the benefits of any help that their children might receive from education but the toughest days were when we had to interact with children who could not study because their parents didn't let them. Meeting a boy who wanted to become a doctor but was driving an auto-rickshaw instead was probably one of the most challenging days for us emotionally as we felt slightly helpless in the grander scheme of things that put him there and us here.

But looking back on the journey we all definitely learned how to deal with nuanced situations and conversations, how to approach people and strike up a conversation with them and how to broach sensitive topics for further investigation. 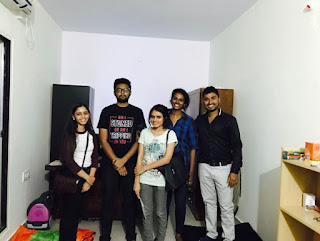 In collaboration with the student council of St. Joseph's College of Commerce working on the Peace project.The Peace project is a program dedicated to Hiroshima-Nagasaki day on 9th of August to remember the tragic effect of nuclear weapon. It’s a speech of peace all over the world provided by our volunteers and dignitaries. Also we will be organizing a signature campaign on this day in which the students will be signing in support of this campaign.

We present you some of our volunteers from June / July 2019 and their work with children in the slums and at St Gaspar's school.  Here you will find Georgia, a volunteer from Albania who has volunteered mainly in the slums of Bangalore to offer extra-curricular activities and offer help in the school of these slums.


Here are other pictures showing other volunteers doing yoga, doing activities in slums with children and a teacher in a slum school.
Here is the work of our volunteer Aishwarya from France who volunteered at St Gaspar's School in Bangalore (Doddanagamangala). She gave French lessons to 8th-grade, 9th-grade and 10th-grade students.

Accede to start up volunteering the school with hands of magic -Providing computers/funding for computer training of students. -Strengthening of Library. -Adoption of slums near the school. -Hand holding handicapped students to lead a normal life.     -Training Students on the art (Dance, Music & Singing) -Physical training (Rugby, Football…..) -Providing play materials -Training student on various skills, Self Development, Personality development etc. -Providing Scholarships -Training teachers on to improve the education quality -Conducting workshops on cultural activities to the children’s -Creating awareness about importance of education to children’s -Adoption of a kid by providing basic amenities. -Create awareness of child labor and social activities